The Groovi-SI-Belt: Info for the practitioner

Over the past 15 years, the use of a Pelvic compression belt has become recommended for both lumbo-pelvic support and failed load transfer in patients requiring lumbo-pelvic control for pain and/or instability (Mens et al, 2006, Kim et al, 2017).
A combination of an SI-belt with a spinal stabilisation rehabilitation program may be the best treatment intervention for patients with chronic low back pain or pelvic pain (Lariviere et al, 2019).
It has been found to improve health related quality of life, better steadiness during walking activities, modifies muscle recruitment sequencing during loading activities, helps prevent unwanted substitution movements and reinforces and retrains the optimal motion (Kyung-Mi-Park et al, 2010; Heller, 2006; Hammer et al, 2015; Jung et al, 2013,Cha et al, 2016). 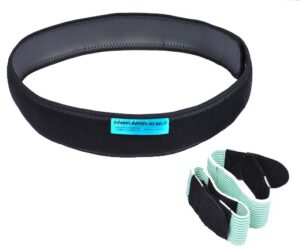 The SI-belt also provides excellent support after abdominal surgery, or for post-operative support after lumbar spine surgery.
The Groovi-Active-SI belt has a neoprene base to minimize slipping during intense exercise. Although findings are yet to be researched, there is strong clinical evidence that this SI belt enhances sports performance by increasing force closure & the ability to transfer load during activities requiring lumbopelvic control.
It is well known that patients, or athletes, with low back pain tend to brace with their diaphragm as a substitution strategy, to increase lumbo-pelvic stability via increasing intra-abdominal pressure (McLaughlin, 2011). This creates abnormal dysfunctional breathing patterns, such as shortness of breath during exercise, an erratic & high respiratory rate and an apical breathing pattern, using the accessory muscles of respiration in the cervical spine, resulting in neck pain. It was found that adding compression through the ilia, such as with an SI belt, normalised the breathing patterns in these patients (O’Sullivan & Beales, 2006).
The use of an SI belt is considered an active and not a passive intervention as it stimulates optimal firing & increases lumbar stiffness. Its use is recommended in conjunction with a rehabilitation program & active participation by the user (Lariviere et al, 2019).
The Groovi-SI belt as well as other compression belts do not ‘weaken’ stabiliser muscles, as would be the case with a lumbar support type brace, which is  positioned near the kidneys at the 3rd Lumbar vertebra (L3).
The SI-belt provides compression across the pelvis, it enhances form & force closure of the lumbo-pelvic muscles & in this way promotes optimal firing of the required stabiliser muscles.
This compressed position effectively positions the muscles of the abdominal canister in an inner range position, for example it allows those muscles to be  activated in a position they could not attain by simply attending a Pilates class. 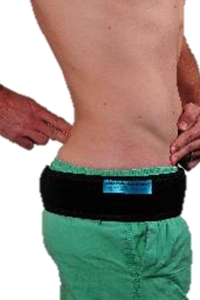 The Groovi-SI-belt consists of a light fabric which is wrapped around the pelvic girdle and secured with Velcro.

The Groovi-Active-SI-belt has a neoprene base to prevent slippage during exercise.

The Groovi-Curve-SI-belt has a neoprene base and is shaped to accommodate users that have a larger buttock.

The Groovi-Preggie SI-belt material based and narrow at the front to sit below the pregnant belly. 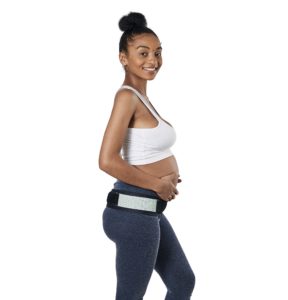 The innovative strong elastic power compression straps which provide the force closure are simply attached to the belt from the side of the hip.

The Groovi-SI- belt is innovative in that compression is provided by two power straps, each with a central Velcro attachment, so that the power strap is then from the central point in two different directions. This improves ease of application greatly, compared to other products, without sacrificing any of the compression benefits. 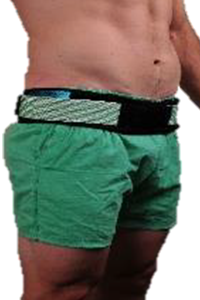 Studies have found that optimal positioning to significantly reduce sacroiliac laxity is just below the anterior superior iliac spines (ASIS’s) at the front & below the buttock crease at the back (Damen et al, 2002). The advantage of the Groovi-SI-belt is that the compression force can be adjusted (increased or decreased) according to each patient’s specific pelvic dysfunction. Also, the direction of the compression can be varied: e.g.: bilateral anterior, bilateral posterior, or one side anterior with the opposite side pulled posteriorly to improve force closure prescriptively.
The Active Straight Leg Raise Test (ASLR) is a validated test to assess both the ability for the pelvis to transfer load, as well as the functional integrity of the lumbo-pelvic force closure mechanism, in patients with low back pain & pelvic girdle pain (Mens et al, 2001; O’Sullivan et al, 2002a).
There is a direct relationship between patients with a positive ASLR test & those who will benefit from using an SI-belt.
It has been shown that if you apply manual compression during the ASLR test it can reduce the effort to lift the ‘heavy’ leg (Mens et al, 1999). If the manual  compression helps, then so will application of an SI- belt.

How to perform the active straight leg raise Test 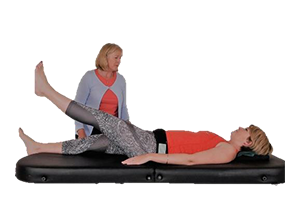 The ASLR test is used to determine exactly where and how much compression is needed. From supine, ask the patient to alternately actively lift each leg approximately 20cm off the plinth.
Observe for substitution strategies such as: abdominal wall bulging, trunk rotation, breath holding, rib flaring (over-activation of internal oblique), drawing in of the ribcage (overactivation of external oblique) or overactivation of the contralateral hamstring to perform the lift.
Also – observe & note if the test movement provokes any lumbopelvic pain.
Ask the patient which leg feels heavier to lift.
The physio applies a sustained passive compression and the ASLR is repeated.
Lee (2004) proposes that by varying the location of the compression across the pelvis, information can be gained regarding which of the local stabilisers and the vectors of the abdominal canister are deficient. 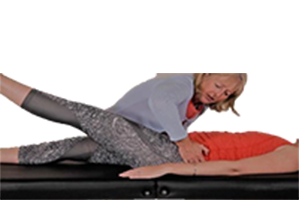 Apply compression manually to approximate the anterior superior iliac spines (ASIS). This replicates force closure anteriorly as if increasing activity of Transversus Abdominis and its associated fascia.
Then apply compression posteriorly to approximate the posterior superior iliac spines (PSIS). This replicates force closure posteriorly as if increasing activity of Multifidus and its associated vectors. Compression in the direction of medial femoral rotation approximates the pubic symphysis and replicates pubococcygeus (anterior pelvic floor). The test is considered positive if the patient reports a marked improvement in the amount of effort required to perform the ASLR. These patients will benefit from the use of the Groovi-SI-belt to increase Force Closure. If manual compression increases pain & makes the ASLR more difficult for the patient, then these patients have too much force closure & the use of an SI-belt is not indicated.

Once the resistant power bands of the SI-belt are applied, the ASLR is repeated. The patient should notice a marked difference in the ability to transfer load through the pelvic girdle through a reduction in the effort required to lift the leg when either supine or in standing.
If the patient has severe constant pain and/ or pelvic dysfunction then, initially, the pelvis should be supported by the Groovi-SI-belt whenever the patient is vertical (i.e. standing, sitting or during any activity of daily living). The pelvic compression belt has been shown to improve the quality of moving from sitting to standing (Kim et al, 2017) as well as improve optimal firing and motor control during bridging (Cha et al, 2016). 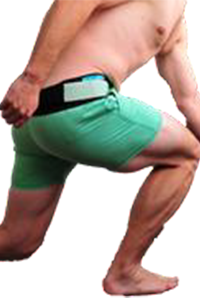 The patient also uses the belt whilst performing stabilising (core) exercises. The belt is to be used in conjunction with a progressive rehabilitation program which addresses the retraining of the local system to improve timing, motor control, co-contraction, control intra-abdominal pressure, resist segmental translation and optimally modify respiratory mechanics. Rehabilitation is then progressed to retrain the global ‘sling’ muscle groups that assist in lumbo-pelvic stability. 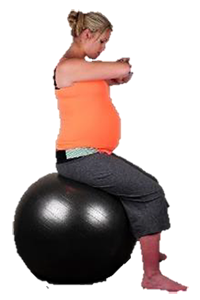 As force closure improves, the patient should wean off the belt by reducing the amount of compression (loosen the tension in the compression straps) and finally removing the belt altogether for short periods of time.
Ultimately, they should be able to eliminate the need for any external support until it is used merely as a precautionary measure during recreational or sporting activities such as hiking or golf.
For intermittent pain, the patient should use the Groovi-SI-belt during activities that provoke pain, as well as all rehabilitation and sporting activities.
As a performance enhancer, the patient need only wear the Groovi-Active-SI belt during their sporting training as well as competition.

About Tanya Bell-Jenje (Msc physio)
Open chat
1
Welcome to Groovi Movements !
How may we assist you today?
[]